2016 is going to be an exciting year. Are you up for a challenge? An adventure? I have some ideas….

The Duke of Edinburgh’s Award celebrates its 60th Anniversary in 2016 and everyone is invited to take part in the Diamond Challenge. Yes, anyone can take part, whatever your age. I’ve set myself the challenge to complete 60 days of adventure, using as many different modes of travel as possible, to mark 60 years of the DofE. Now more than ever I appreciate what the DofE has to offer to young people and I am raising funds for the DofE so that more and more young people can have the chance to participate https://www.justgiving.com/60-adventures-for-60-years-of-the-DofE  I’m also the Diamond Challenge Champion for DofE Wales so please get in touch if you want more information or if you have a group of people who want to participate. Whether it’s an adventure, skill or personal challenge we’d love to hear from you.

I can’t think of anywhere better to start these adventures than right here in Wales in its Year of Adventure. I’m excited to be an ambassador for the Visit Wales campaign and my involvement starts on New Year’s Day in my home county of Pembrokeshire when I’ll be opening the Saundersfoot New Year’s Day Swim. This annual event which started in 1984 sees over 1,000 crazy individuals dash into the sea for a bracing start to the New Year. Watch the video here. 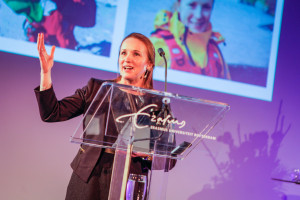 I’ll also be celebrating a professional milestone this year as I will have been speaking about my record-breaking adventures for 10 years and I’ll deliver my 250th talk.

Some of my upcoming talks include:
Saturday 9th January 2016 – Cotswold Cardiff, 6pm – Everest & Antarctica: Tales from two Welsh record holders. This is a FREE event but please book your place at http://www.eventbrite.com/e/everest-antarctica-tales-from-two-welsh-record-holders-tickets-306654211

And finally, I have been nominated in the ‘Adventurer of the Year’ category of the National Adventure Awards 2016. I have no idea who nominated me so I’d like to say a huge thank you to whoever put my name forward. The winners will be announced at a ceremony in Glasgow on 16th March 2016.

Please could you spare literally 2 seconds to vote for ‘Tori James’ at http://www.scottishadventureawards.com/the-public-vote/